Avoid this analytics interpretation mistake, otherwise, it will cost you.

Which metrics are you looking at? visitors, time on page…

However, when you look at something like time on page, a lot of people aren’t aware that, the time on page is never counted on the last page of the user’s journey and will always show zero.

Don’t kill the wrong thing on your site

If they’re not aware of that technical limitation that can result in people making some very poor conclusions about what content they kill on their site, for example. We might look at things like bounce rate often, there’s a sense that bounce means that people have immediately left a page. Having arrived actually just means that after 13 minutes they had not interacted further with that site.

So it’s sometimes less an issue with the metrics being bad or good. More about making sure that they’re being interpreted correctly and people aren’t making bad decisions on the back of a misinterpretation. It particularly goes when these metrics are taken then circulated in reports that might go around to business and might be picked up by someone that doesn’t have the background to understand what they mean or don’t mean.

Did your visitor stop to grab a cup of tea?

“Visits” – the definition that metric is, is not widely understood. And the key thing to understand is that if somebody is inactive on your site for 30 minutes their visit will end. So it’s a very short term measurement of response. And when you start to look at things like conversion rate of the proportion of visits that did something, that doesn’t mean that they never did it. It meant that they might’ve stopped to have a cup of tea, or they may have been on another tab doing something else. 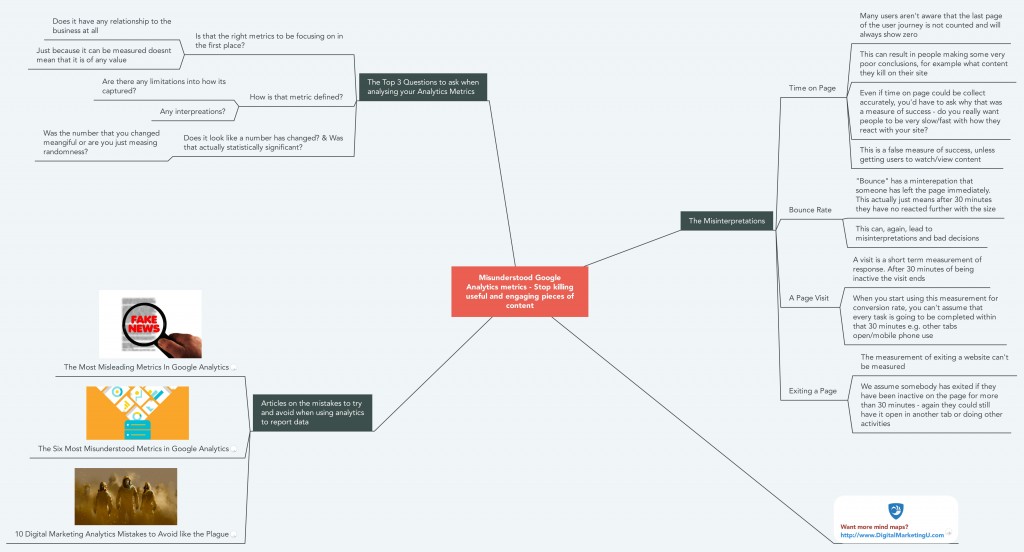 Visitor behaviour in the modern world

In this modern world where people look at websites, whilst they’re on their mobile phones on trains, we can’t really assume that every task must be completed without stopping for 30 minutes. So the reality is we can’t actually measure the act of exiting a website.

What we actually do when we count exits it is we assume somebody has exited. If they want a page and 30 minutes later, they have done nothing on our site. They could still have it open in a tab. I think time on page is firstly, a very inaccurate measure because time-on-page is not counted, ff that page is the final page of the user’s journey.

Secondly, even if we could count time on the page accurately, you’d have to ask why that was a measure of success, and if do we really want people to be very slow or fast in how they interact with us or do we actually just want them to achieve key tasks?

So I think it’s quite a false measure of success unless you are getting people to watch a video.

So pause for a moment, think about the key metric, was it actually meaningful? Or are you just measuring randomness?

I started my career in digital as a technologist with a business focus during the dotcom boom. For the past 15 years I’ve specialised in data and analytics and lead a multi-disciplinary team at Lynchpin to deliver great results for our clients.
2021-12-24T18:04:13+00:00Conversion (Analytics), Conversion (Website)|

For existing and aspiring Managers who want to advance their knowledge, lead with confidence and enhance their CV.